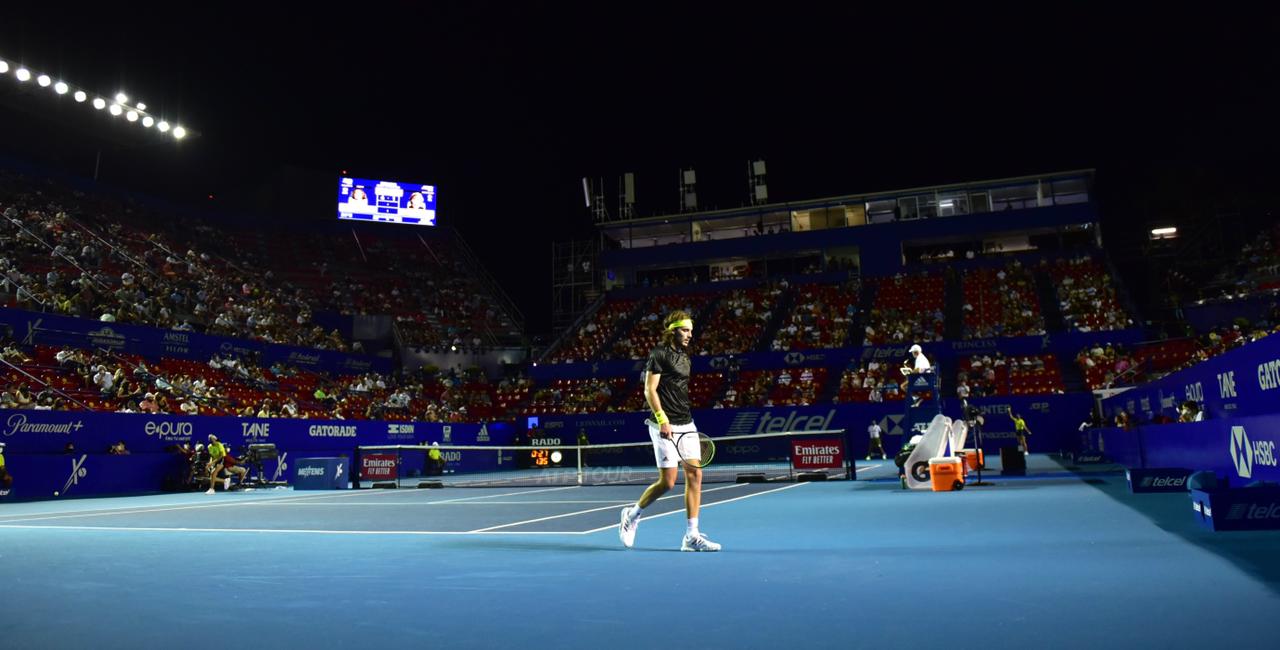 The Greek Stefanos Tsitsipas (No. 5) and the German Alexander Zverev (No.7), seeded #1 and #2, will play against each other in the final of the Abierto Mexicano Telcel presentado por HSBC. Tsitsipas defeated Lorenzo Musetti (No.120), while Zverev defeated his fellow countryman Dominik Koepfer (No.71)

Zverev, who got to to the semifinals without playing the previous round since his rival retired, started off safely and took the control of the first games by breaking Koepfer’s first and third serve.

Everyone thought that Koepfer would put more of a fight against Zverev, however in game six he shortened the score to 4-3 after breaking Koepfer and winning his own serve. But in the next game, Sasha, saved three breaking points, maintained the lead, and two games later Zverev took the first set 6-4.

In the second set, Koepfer playing his first semifinal in the ATP, took advantage of Zverev’s distractions because of the earthquake in the state of Guerrero, match went 1-1.

“I didn’t know what was going on, nor did Dominik, we just started listening to the audience and the lights shook a bit, but we were actually just running on the court”.

Playing all out, Koepfer had a head start at the beginning of the set, which he would not let go until the ninth game when, with two double faults, he lost his serve to Zverev, who kept his own by equalizing the set 5-5.

The 23-year-old German, who plays for the fourth year in a row in Acapulco, still hasn’t lost a single set in the tournament and will reach the final with a sum of only five hours of play. This will be the second time that the German will play hoping to raise the trophy, his first final in Acapulco was in 2019 but he lost it to the Australian Nick Kyrgios.

“A lot has happened since then. As a person and as a player, I have grown and evolved, I am two years older. But definitely my goals remain the same, win in the greatest scenarios. This is a great tournament, and I would be very excited if I win”.

Meanwhile, the Greek Stefanos Tsitsipas (No. 5), first pre-classified, had no problems defeating the Italian Lorenzo Musetti and reach the final of the Mexican ATP 500.

Tsitsipas has shown a great quality in his tennis on his debut in Acapulco. He played very strong in his semifinal match and it only took him one hour and 20 minutes to defeat the 19-year-old by 6-1, 6-3.

In the first set, the 22 years old Greek broke Musetti in the fourth game and went up 3-1. Winning 92% of the points made with his first serve, Tsitsipas only needed half an hour to get the first set 6-1.

Musetti, the youngest player to reach the semifinals since Rafael Nadal back in 2005 (18 years old), felt fatigued after a long week of playing since he started on Saturday playing in the qualifying round. The three matches of the qualifying round, added to the three from the main draw, took him to ask for medical attention after finishing the first set due to muscular fatigue.

“It was hard for me to play tonight, my legs hurt, it was hard to breathe and physically I didn’t feel at my 100%” said Musetti, who will enter the Top 100 ranking next week.

Even though Musetti didn’t stop fighting, Tsitsipas was patient, he took advantage of the situation and after breaking his serve on the seventh game, he took the set 6-3 and the match.

Tsitsipas, five time champion on the ATP tour, will play his first final of 2021 against Alexander Zverev, who has faced before on 6 occasions with a winning record of 5 victories to one defeat.

“I have played well. I feel comfortable in the court. Him (Zverev) has had the same route as me to get to the final. I try not to think about the head-to-head against him because for me every match is a new one. Every match is a new lesson and I always try to evaluate and learn from them.” Said Tsitsipas, who will play his first final since September of 2020 (Hamburg ATP 500)