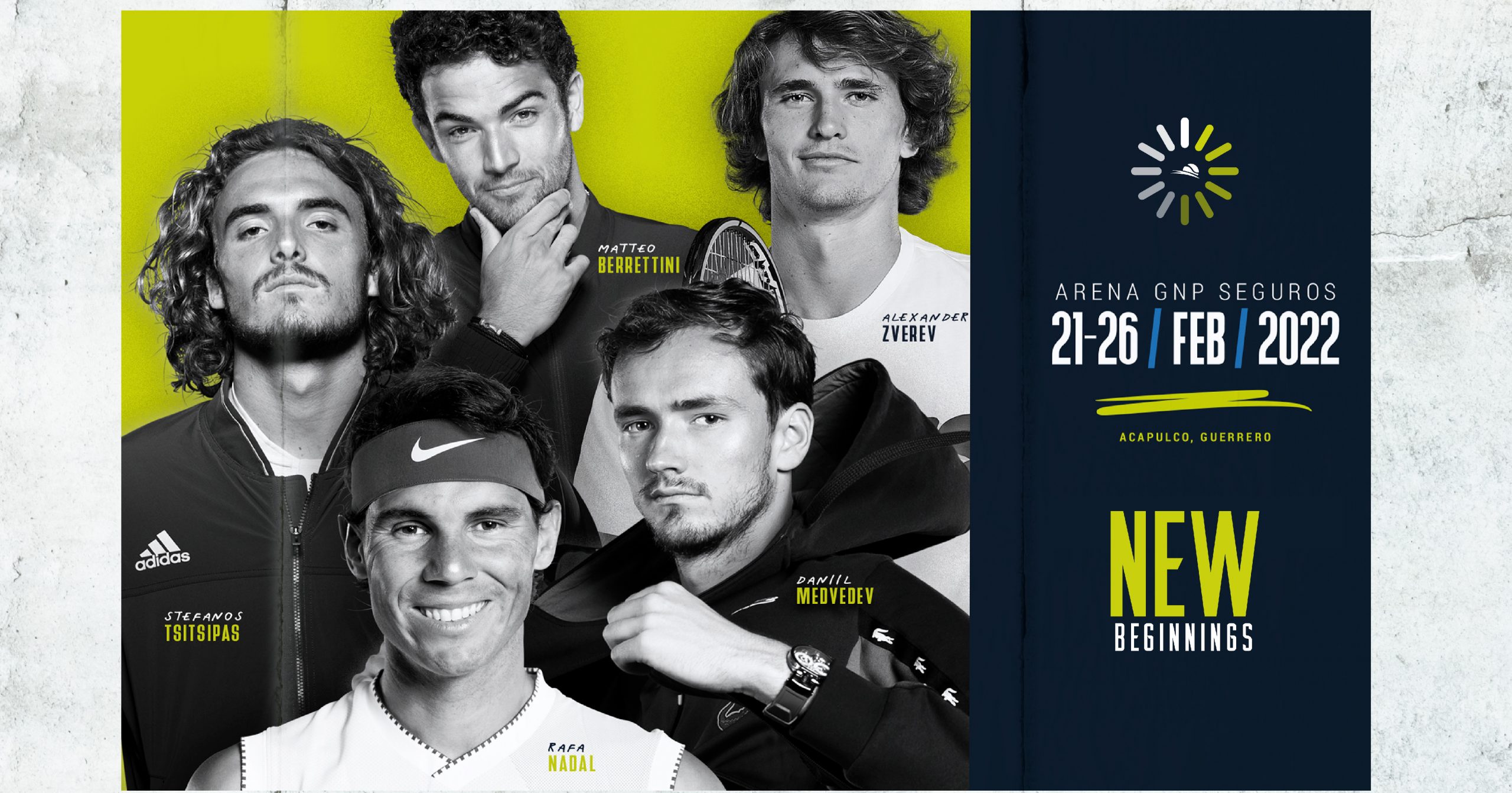 Mexico City, January 25th, 2022. – The Abierto Mexicano Telcel presentado por HSBC announces the list of players that will participate in the XXIX edition of the Tournament, which will take place from February 21st – 26th at the new venue, the Arena GNP Seguros, along with five Top 10 players, Daniil Medvedev (No. 2), Alexander Zverev (No. 3), Stefanos Tsitsipas (No. 4), Rafael Nadal (No. 5) and Matteo Berrettini (No. 7).

In an incredible list of players that closed with the number 68 of the world, this year we will enjoy a great combination of young talent and experience, among them, three former champions of the tournament: Zverev, who will try to defend his title in the new venue; Nadal, three-time champion; and Grigor Dimitrov (No. 28), the charismatic Bulgarian, winner of 8 ATP titles, and loved by the Mexican fans.

Another known player for the Mexican public would be the 26-year-old British Cameron Norrie (No. 12), who made a big jump in his ranking after winning his first two titles in the ATP Tour in 2021; he won the Masters 1000 of Indian Wells and the ATP 250 of Los Cabos. On the other hand, one of the new sensations of the circuit is the 18-year-old Carlos Alcaraz (No. 31). The Spaniard will make his second appearance in Acapulco, after winning his first Tour title in 2021 and winning the NextGen ATP Finals. His countryman, Pablo Carreño Busta (No. 21), 30-years-old and has six ATP titles, will also be present, along with another Spaniard, Pablo Ándujar (No. 57 PR). Other players who have great talent will come to the tournament, such as the Italian Lorenzo Sonego (No. 26), the Serbs Dusan Lajovic (No. 39) and Laslo Djere (No. 51) and the Frenchman Benoit Paire (No. 56).

The matches between countrymen will be welcome, and people will be able to appreciate Isner’s serves, the endurance and solid strokes by Fritz, and Korda’s speed, son of former Czech tennis player, Petr Korda.

Mextenis has worked with local authorities to ensure that the public has access to this special edition: the inauguration of the new venue. Once again, the tournament, through its security program, AMT Safety, will be responsible for the planning and operation of security measures and protocols to guarantee and safeguard the health of the staff, players, and guests within the tournament. Attendees must bring a negative antigen test to attend the event. Once the negative result is presented, you will receive an access bracelet called Safety Pass which will be unique for each person and non-transferable for any day of the event.

The social platforms, as well as the website, www.abiertomexicanodetenis.com, will publish all results, scores, content, and information of the Abierto Mexicano Telcel presentado por HSBC, guaranteeing extensive and a complete coverage for fans. They will also be able to monitor television coverage through ESPN.