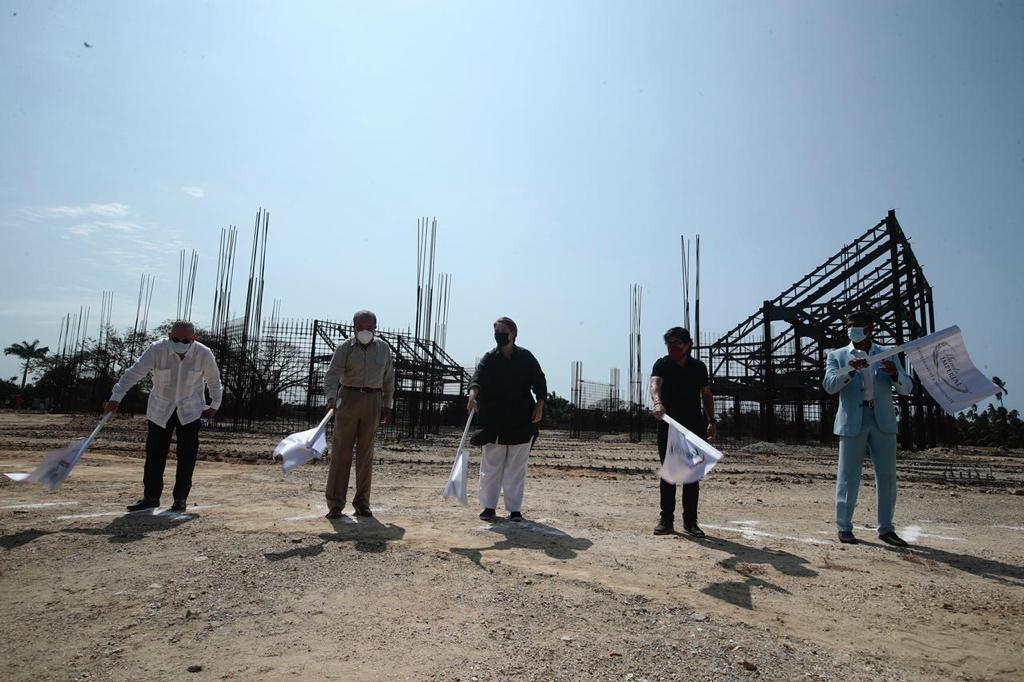 Acapulco, Guerrero.- The president of the Board of Directors of Mextenis, Renata Burillo, participated in the continuation of the construction of the Arena GNP Seguros, the new house of the Abierto Mexicano Telcel presentado por HSBC, which will host the tournament starting in 2022.

The sports complex, that will have a capacity in the main stadium for 10,229 people, had to stop all construction work due to the pandemic, however, since this Tuesday, the construction is back and running, which has advanced 24%, of the venue completed and the foundation of the first structures.

“This Friday, the dream that began many years ago for Grupo Pegaso is now reactivated: building a venue for the most important tennis tournament in Latin America and one of the most important sporting events in Mexico,” Burillo said in a press conference.

She stated that despite the difficult situation the world is going through, “initiatives of this sort are worth sharing as they provide not only great news, but a real support for the people of Acapulco” that from now on it’s generating, and will continue to generate, a huge amount of direct and indirect jobs which is a very strong support for the destination.

Burillo highlighted that the Abierto Mexicano Telcel presentado por HSBC “with its extensive media and international coverage, will add to the effort and help generate a positive image for this magnificent port, our beautiful Acapulco”.

The complex, which is part of the 2017-2022 Master Plan, has an investment of 30 million dollars, as well as the generation of 150 direct employments and up to 400 indirect employments, promoting an economic growth in Acapulco and the correct reactivation of activities that benefits the social welfare of the destination.

In the continuing of the construction of the new venue for the tournament, the president of the Grupo Autofin México and Grupo Mundo Imperial, the Public Accountant, Juan Antonio Hernández, said that with this construction “we will reach an extraordinary level of attraction”.

He also said: “I asked Alejandro Burillo that later on maybe we could be co-sponsors of different tennis events,” Hernández said, also adding that among other shows, there will be concerts, boxing matches and wrestling, basketball, exhibitions and other world-class events.

This idea was confirmed by the President of the Board of Directors of Mextenis, who acknowledged that the idea from the beginning was having a multifunctional venue and was contemplated to be used as many times a year.

The Governor of the state of Guerrero, Hector Astudillo Flores, considered very important “the fact of continuing with total support for the conclusion of this project”, especially in this moment that we are living the middle of the tournament in Acapulco.

“I’m sure that in March of 2022, the Mextenis tournament will be held in this venue,” said Astudillo.

The project, designed by the Architect, José de Arimatea Moyao López, includes a stadium for 10,229 spectators, and two smaller stadiums, Grandstand for 3,000 and 1,500 people and four other courts. One added value of this construction is the sustainability of the project.

There will be a total of 28 suites that can accommodate 22 spectators each with rows of three seats and benches, a comfortable interior room with air conditioning, toilets and bar. There will also be two suites for 56 people in all the facilities. In addition, it will have easy access to people with disabilities at all levels and up to 800 parking spaces. This property will be located in Paseo de los Manglares and Boulevard de las Naciones, a venue with views of the Pacific.